Saving a rainforest plant from extinction

The Small-leaved Tamarind is a medium-sized, rainforest tree growing 18 to 30 m in height and has a fluted trunk and greyish-brown bark with vertical cracks. New leaves are at first softly-hairy, but soon become more or less hairless. The leaves are 10-35 cm long and are divided into four to eight leaflets. Creamy-brown flowers are borne on a stem 10-16 cm long.
The fruits are hairless, yellow-brown capsules, 3-5 cm in diameter, usually with two lobes.
Each lobe contains a single, round seed surrounded by thick bright orange/red or yellow flesh (NSW DECCW 2004h). 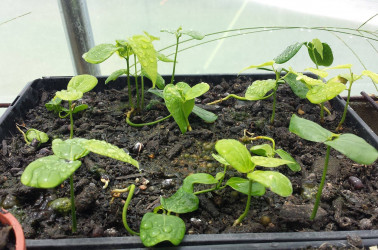 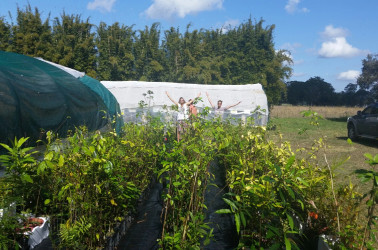 The Small-leaved Tamarind is a tree found in the subtropical rainforests of Northern NSW and Southeast Queensland. The species is at risk of extinction due to low numbers and resulting decline in genetic diversity. Only 106 individual mature trees are known to survive in-situ (in the wild). This project will propagate, grow and plant 200 seedlings of the Small-leaved Tamarind.

The plantings will take place on private land.

Threats:
Habitat destruction and fragmentation: The clearing of rainforest habitat and conversion of land use to farming and development is believed to be the primary reason for the initial decline and subsequent sustained low population numbers of the Small-leaved Tamarind. Habitat fragmentation has isolated Small-leaved Tamarind sites that may formerly have been part of a system of more-or-less continuous habitat. As a result, the function of pollinators, seed dispersers and seed predators may have been interrupted and gene flow between many areas may have ceased.

Loss of genetic diversity, including;

Inbreeding depression: Fragmentation of habitat has resulted in small isolated occurrences of the Small-leaved Tamarind. There are very limited numbers of individuals that are reproductively active and producing viable seed. Seeds from this species do not remain viable for long in the natural environment.

Genetic pollution: Genetic pollution is a term often used to describe undesirable changes in genetic diversity as a result of the planting of inappropriate genetic material. The Small-leaved Tamarind is widely propagated for “bush food” production, for planting during bush regeneration activities, or as a specimen tree in gardens. Where cultivated specimens of the Small-leaved Tamarind are planted in close proximity to naturally occurring individuals there is a threat to the evolutionary potential and genetic integrity of the species through genetic pollution.

Propagation and ex-situ collection. Due to its attractive nature and ease of propagation, the Small-leaved Tamarind is a popular nursery tree and has been used extensively in private, street and park plantings. Since 1993, over 6000 trees have been distributed by nurseries involved in its propagation. It is probable that the seeds for these trees were sourced from a small number of easily accessible sites. Sourcing all seeds from a small number of trees may have a negative impact on the overall genetic diversity of the species, thus reducing the species’ overall evolutionary potential.

Solution:
With your support our partners at Reforest Now have been carefully propagating 200 Small-Leaved Tamarind trees to build a population for reforestation. By planting these trees back into the rainforest, this will see the remaining population nearly doubled, giving the species the much needed lifeline it needs to re-establish itself within the region.

This will align with additional restoration of the subtropical rainforest on the site that has seen thirty-eight hectares restored in the past decade by rainforest regenerators using chemical free methods.

Reforestation will also benefit 25 threatened native species of birds, mammals, amphibians and reptiles found within the Wilson's Creek region including:

Urgency and Action:
The trees are now ready for planting.

Reforest Now have collected trees from as diverse locations as possible within the species former contiguous range, to maximise the chance that we are capturing genetic diversity from as many surviving lineages as possible and combining these into a 'seeding population'. By planting these at the top of a water catchment it can repopulate downhill and downstream with higher genetic diversity than could now occur from the little and fragmented trees that remain.

Partners:
The nonprofit organisation, Reforest Now will implement this project.Their nursery in Mullumbimby will be used to propagate theSmall Leaved Tamarind trees.

Follow our cause in saving Australia's endangered wildlife, and receive newsletter updates on the Saving a rainforest plant from extinction and other projects and successes.