Protection of a wild population of

In the dry woodlands of Western Australia, the numbat (Myrmecobius fasciatus) is in a race against time, facing pressure from habitat degradation, encroachment and invasive predators. Previously, FAME assisted with the training and use of feral cat detector dogs across the species’ home range; this new project carries on with that vital work, but with a new focus. 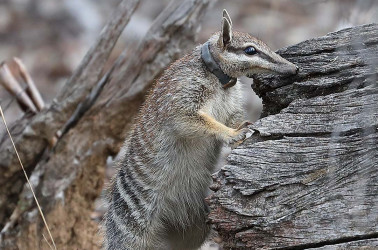 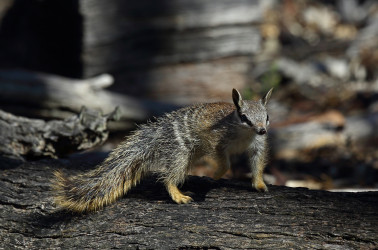 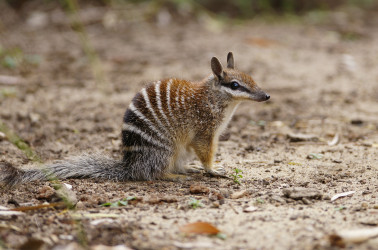 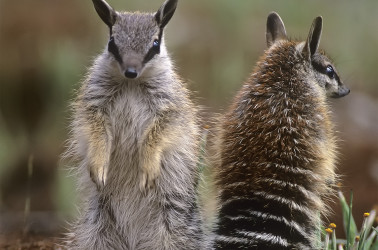 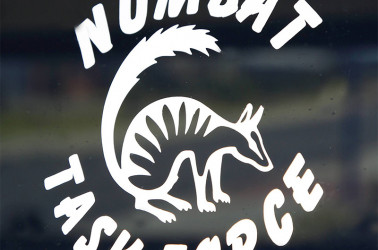 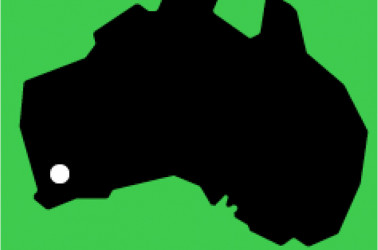 Numbats are one of Australia’s most threatened marsupials, being listed under the EPBC Act and the IUCN Red List as Endangered. As with many native species, their main threats are feral predators and loss of habitat through land clearing.

Known as the Noombat in the Nyungar language, and Walpurti in the Pitjantjatjara dialect, they are a small predator weighing less than one kilogram and featuring a striped pelt, a very fine, pointed muzzle and a sticky tongue that vacuums up 20,000 termites a day! At around 40 centimetres long including the bushy tail, they are not much bigger than an average male foot!

Being one of only two diurnal marsupials - active during the day rather than night - they are a special addition to Australia’s incredible biodiversity. Whilst sitting within the same order as other carnivorous marsupials (Dasyuromorphia), numbats are only distantly related to animals like quolls and the Tasmanian Devil and are actually more closely aligned with the extinct Thylacine!

They are the sole member of their family, Myrmecobiidae, which studies suggest puts their impact on phylogenetic diversity loss as far greater should they go extinct - just one more reason they need to be saved.

PREVIOUS WORK TO PROTECT THE NUMBAT

In 2018 the Foundation partnered with the Australian Government’s Threatened Species Commissioner, the WA Department of Biodiversity, Conservation and Attractions, and the Numbat Task Force to use conservation dogs trained in feral cat detection.

The Numbat population in the Dryandra Woodlands has increased significantly following this feral cat control but invasive predators demand ongoing work. As such, baiting and trapping continues in cycles, with fox and cat numbers kept under control and analysis of Numbat predation playing a key part in understanding the effectiveness of this work.

FAME have committed to work with the Numbat Task Force on an ongoing project spearheaded by Dr Tony Friend. FAME will be providing 20 new radio collars for use within Western Australia’s Wheatbelt with the following aims:

* Additional funding to the original project amount has been allocated.

WHY DO WE COLLAR NUMBATS?

Since the 1980s, radio collars have expanded the knowledge of numbats remarkably including their distribution, dispersal of young, home ranges and most importantly, the impact of predators.

For example, between 2010 and 2013 radio collars demonstrated that feral cats had become the most significant predator of numbats since foxes were controlled. Once cat control was effected, cat predation dropped to low levels.

These new collars will continue that oversight for at least a year and monitoring will help to identify causes of Numbat mortality. These collars are a critical part of increasing our understanding of this secretive, endangered animal.

A widening knowledge base supports work to reduce the impact of predatory feral cats and foxes, improve protection of relevant habitat, and ensure that Western Australia’s emblematic predator has a future in the Australian wild.

IN THE FIELD WITH NUMBATS

FAME recently visited the project site in Western Australia to see the team and view the progress being made on the ground. You can watch a short video from the field below:

A MESSAGE FROM OUR PARTNERS

John Lawson and Rob McLean from the Numbat Task Force have passed on their thanks to the fantastic community of FAME donors, helping to enable this work:

“We would like to thank FAME for their continued support of the Numbat Task Force, and the numbats, but most of all we would like to thank you - the donors. Without your kindness, care, and compassion for our wildlife, without you, FAME would not be able to fund the important work they are supporting across Australia for our threatened fauna and flora.”

WE NEED YOUR SUPPORT

Numbats are iconic, unique marsupials that fill an important niche in Australia’s ecosystems. They were previously found across southern Australia, from WA to NSW. Now, they are restricted to two remnant populations including the focus of this project: Dryandra Woodlands. Please consider a tax-deductible donation today to help make this project possible.

Follow our cause in saving Australia's endangered wildlife, and receive newsletter updates on the Protection of Numbats and other projects and successes.