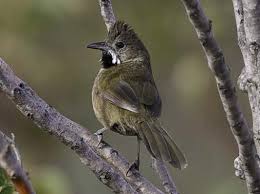 The Western Heath Whipbird is a medium-sized ground-dwelling songbird. Built with powerful legs, short wings and a long tail, it is now restricted to a small area on the coast of south-western WA. Adult birds are olive on their upper body, the underbody is olive or greyish and it has a distinct narrow black stripe bordered below by a narrow white stripe.

The Western Heath Whipbird mainly feeds on insects – beetles, ants, grasshoppers, and occasionally, small reptiles. Major threats include loss of habitat due to land clearing for agriculture and fire.