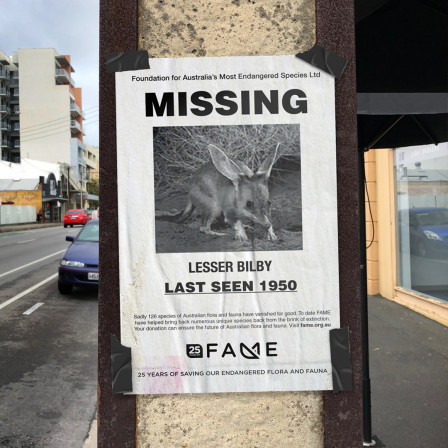 Threatened Species Day: a poignant reminder of our devastating track record of extinction.

September 7 is Threatened Species Day – perhaps no better day on which to draw attention to the fact that Australia has one of the worst rates of extinction in the world. No fewer than 126 species of native flora and fauna has become extinct since European settlement.

The Foundation for Australia’s Most Endangered Species Ltd (FAME), is a national not-for-profit, and works tirelessly with a vision to stop the extinction of Australia’s precious flora and fauna. FAME joins with like-minded organisations and partners on projects that increase the likelihood of the survival of one more endangered species. FAME’s scope for supporting conservation projects is wide and varied and they certainly do not shy away from taking on a project that might appear to be too challenging.

During the course of the coming financial year, FAME has announced its commitment to support two new projects aimed at restoring threatened flora species in Australia being;

FAME CEO, Mrs Tracy McNamara, said the projects had been chosen from a large number of grant applications.

“Demand for our support is always high but, being completely donor funded, we must select carefully in order to ensure that our donors’ money is spent effectively, with the best environmental outcomes.

“The situation is dire. There are only about 90 Macadamia jansenii trees remaining in their natural habitat. In partnership with the Macadamia Conservation Trust we work to ensure their survival by planting new trees in order to avoid this species of flora from the threat of extinction.

“Another important project in the coming financial year is to work with the Conservation Ecology Centre to survey and then identify suitable sites to propagate the threated Tall Astelia. FAME will provide the seed-funding to ensure this important work is underway,” Mrs McNamara said.

Additionally, FAME – now in its 25thyear – is continuing its involvement with the reintroduction of the Western Quoll in the northern Flinders Ranges; ensuring the survival of a threatened Numbat population in the Western Australia wheatbelt, identifying the elusive Kangaroo Island Dunnart and assisting to build robust populations as Aussie Ark with the long term goal of rewilding.

Of course, the Foundation remains deeply involved in the work to support the continued existence of the Tasmanian Devil where island and peninsular populations remain small. Devil Ark’s proven methods have, thus far, been instrumental in preventing extinction and in addressing the threat from its facial tumour disease. For the foreseeable future, Devil Ark remains critically important and a focus for FAME.

“We are pleased to be able to support these various projects, especially given the havoc wreaked on native species since European settlement.

FAME has an excellent track record in selecting programs and projects that have a good chance of success.”

“We are setting out on our next quarter of a century with the aim of establishing a capital fund so that FAME can continue its important work, secure in the knowledge that resources will be there to support worthwhile projects that have a good chance of achieving success,” Mrs McNamara added.

To find out more about FAME, its current projects and its commitment to saving Australian endangered species from extinction, visit www.fame.org.au.