The highs and lows of our most endangered macadamia nut species 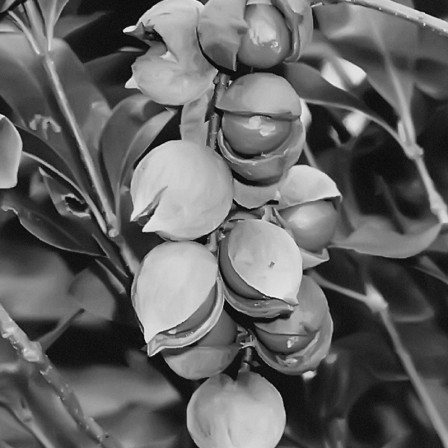 LOW:
In December, we reported that our newest project securing the future of Australia's most endangered macadamia nut was under threat of fire. The rarest of the macadamia species, Macadamia jansenii, of which there were thought to be only 90 trees left in the wild, was severely in danger of being wiped out by catastrophic fires in the Gladstone region.

We thank you for your expressions of concern during this time. Thankfully, the remaining Macadamia jansenii trees survived the initial fires. While we are mightily relieved now, a worrisome summer season has a long way to go.

Other forests in the region were not so lucky and were completely destroyed. It's a stark reminder as to how precarious survival of a species can be.

HIGH:
Confirmation has been received from our project partner, Macadamia Conservation Trust (MCT), that new populations of Macadamia jansenii have been positively identified following targeted searches. Thanks to funding provided by FAME, MCT has been able to commission searches to locate any other existing trees.

"In total, 37 healthy trees have been found to exist in two smaller populations in a neighbouring gully in the Bulburin National Park, about 5km from the original population", explains Denise Bond, MCT Executive Officer.

It can now be said with certainty that there are 127 confirmed Bulburin Nut trees left in the wild.

For more information, please read the media release on the FAME website.

What next for the Macadamia jansenii?

The next steps of the project will involve MCT working with National Parks to establish exact sizes and locations of all newly-discovered trees and working to ensure they are protected from weeds and future fire threats. Testing will determine the genetics of the trees within the newly-discovered populations. If they show diversity from the original trees, plans will be made to add them to future insurance populations.

To make a donation or for further project information, please visit the project page on the FAME website.