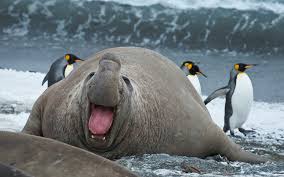 It's not quite a Seal. And it's definitely NOT an Elephant. Hunted to the brink of extinction in the 19th century for their meat, oil and fur, Southern Elephant Seals are a pretty large species. They have big square heads, strong front flippers and the girls have large black eyes and quite bulbous nostrils. The most distinctive feature of a male Southern Elephant Seal is his conspicuous bulbous nose; a trunk-like proboscis, and its main function is to emit noises primarily to ward off other males. A male is usually at least five times the size of a female. Now when you are talking about a 800kg female and therefore a male being 4000kg, that's just enormous!

There are two species of Elephant Seal in the world, and the Southern Elephan Seal breed and haul out on Australia's Antartic Territories (Macquarie and Heard Islands off Tasmania), but from time to time they do also find themselves on the beaches of Tasmania and the Australian mainland. In the ocean, they live alone. They come ashore on land or ice to breed, are a highly territorial species, and a dominant male could have a harem of several dozen females. Southern Elephant Seals are well adapted to survive the cold conditions and can remain undertwater for two hours at a time as they fish for squid, fish and crustaceans. The greatest threat to their survival is commercial fishing operations (entanglement in fishing gear and other debris) which also contributes to a decline in their primary food source. Breeding sites are now protected to help remaining populations reestablish themselves