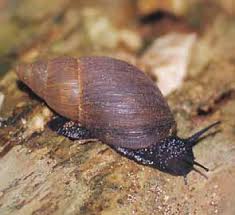 The Lord Howe Placostylus. It sounds prehistoric: a large land snail capable of living for 20 years or more. It has a pointed, conical shell and a black, soft body. They are partial to shady, damp habitat and tend to avoid open areas - smart move. Endemic to Lord Howe Island, of course the Placostylus was once widespread on the Island, but now is confined to two fragmented locations.

With no more than 1000 individuals left, it's predicated that the Lord Howe Island Placostylus population will continue to decline. Hatchling and juvenile mortality is high, added to that predation by invasive species, native species and habitat clearing could turn out to be just too much to bear. Once the population hits zero it can't decline any further now, can it.