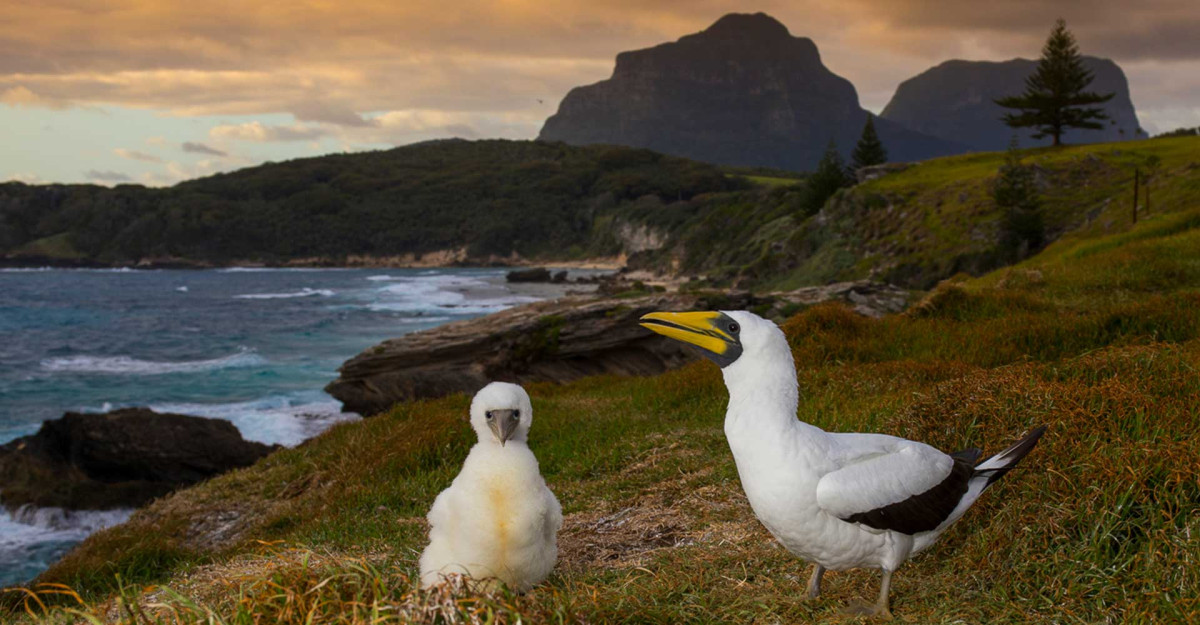 Imagine you are floating in waters more than 500km off Australia’s east coast. It is seven million years ago, and the end of the Miocene epoch is approaching. In this period, Earth has gone through a dramatic cooling event, in which the Arctic ice sheet was formed, and the famous megafauna of Australia have made their appearance.

In front of you, lava spews from the seabed, forming a shield volcano that rises some 1000m above the surface of the water. You bear witness to the formation of what will come to be known as Lord Howe Island, one of the few land masses never part of a continent. A PARADISE IS FORMED

Now imagine time speeding up; You witness countless days with countless nights, and storms come and go in a blur. Over the millenia you sit watching, mass erosion of the volcano occurs at the hands of brutal winds and constant ocean swells. This reduces the island’s size to a portion of its former glory, and you feel that eventually it may just whittle away.

But in the subsequent years as you watch nature work its magic, a haven of life seldom rivalled begins to take shape.

The formation of coral and isolated seabird colonies, and the evolution of entire genera of new plant species, make the land an oasis in the midst of an ocean. At its southern tip, two mountains shoot up from sea level - each almost one kilometre in height - flanked by steep cliffs of black rock and sparse bush.

The flora that has exploded across the soil is attracting voyagers of both wing and scale, and a bountiful community of rare birds, reptiles, insects and fish blossoms before you.

This era is Lord Howe Island’s most fertile, but the tropical paradise must set itself to weather what will be a fearsome invasion of non-native species, pushing many of the island’s inhabitants to the brink.

You climb out of what is now the Tasman Sea, and dry off. Time has skipped forward to the recent past, and we can take a more leisurely walk to survey what has become of this special land mass.

From the explosion of life you witnessed above, Lord Howe Island became home to 241 species of indigenous plants - half of which are endemic - and more than 200 species of bird.

The world’s rarest insect, the Lord Howe Island Phasmid, is one of some 1,600 invertebrates that rely on the isolated ecosystems there.

Tragically, a ship ran aground in 1918, releasing Black rats (Rattus rattus) which made a home on the island. This introduction was a death warrant for endemic and migratory species ill-equipped to deal with the threat.

Over the next Century, the rats grew in size. With ample food and no natural predators, they sent five species of birds and 13 species of invertebrates extinct, and pushed many other creatures in a similar direction.

The famous Phasmid - the size of a human hand - was believed to have disappeared forever, until some were found clinging to life on the sides of the two mountains.

Come the early 21st Century, the amazing variety of flora and fauna of Lord Howe Island are facing a crushing combination of introduced species, agricultural expansion and climate change.

Something had to be done. A MIRACLE IN THE TASMAN

Despite the tragedy seen in the preceding decades, life has managed to flourish in the face of an ecological onslaught.

At least 18 land bird and 14 seabird species are known to breed on the island. Some of them are highly endangered, including the endemic Lord Howe woodhen. Some 10 genera of plants are found nowhere else on Earth, and many unique species of various animals still reside there.

From the 1970s, the importance of conserving this marvel of ecology became more widely acknowledged, and biological surveys, the announcement of protected reserves, and even a UNESCO World Heritage listing followed.

The prevailing issue however continued to be the ever-present rats. Drastic action was needed, and the very essence of Lord Howe made an all-in play possible: it is, of course, an island.

Lord Howe Island’s isolation, responsible for its distinctive biodiversity, would also lay the foundations for an ambitious rescue mission in the form of an eradication program. An eRATication, if you will.

After 15 years of research, consultation and planning, the LHI Rodent Eradication Project launched its major operation in winter 2019, laying baits across the island with both aerial and ground teams.

Incredibly, in the 10 months since October last year, no rats have been detected on the Island.

CAN WE SAVE THE UNIQUE SPECIES OF LORD HOWE ISLAND?

Your trip through time has delivered you to the now: the beginning of our ambitious project to stop further extinctions in this special place.

Despite the apparent success of the eradication, much remains to be done if we are to fulfil our responsibilities as custodians of Lord Howe Island - one of the few remaining slices of wild left.

You can read more about all of these on our dedicated Lord Howe Island Project page here.

After the incredible journey this island has taken, and the amazing work done to remove the invasive rodents at the heart of many extinctions, it would be a tragedy to see this biodiverse hotspot suffer further - and we’re committed to that not happening.

Everyone who supports a FAME project is responsible for the amazing work that our on-ground partners do.