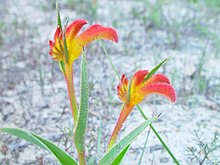 Surviving ever so slightly in the south-western coastal region of WA is the endangered Little Kangaroo Paw. What a little darling. With its hairy stem, the plant produces equally as hairy green to yellow and red small, slender flowers. Little Kangaroo Paw prefers moist, sandy soil but has also been found growing precariously around granite outcrops and along road verges. It's another of our natives that relies on other species, the plants pollinated by birds, small mammals and bees. Germination is also stimulated by summer fire, resulting in the most prolific flowering.

Little Kangaroo Paw is susceptible to fungal diseases, habitat fragmentation, unseasonal fire, grazing and weeds. A lot to be wary of for such a native little darling.