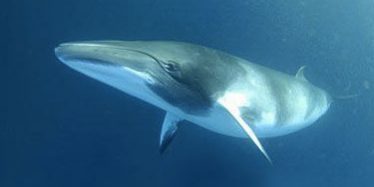 It’s the second largest of the whale species (the largest being the Blue Whale) found anywhere in the world’s waters, and we are fortunate enough in Australia to have these beauties grace our water from time to time throughout the year.

Fin Whales can be between 20-27 metres long and weigh more than 70 tonnes. They are long and slender and the female is known to grow larger than the male of the species. They can sometimes be seen in small groups of 6-10 whales at a time, but more commonly observed singularly or in pairs.

While they haven’t been known to mate or calf in our waters, Australian Antarctic waters are important feeding grounds for Fin Whales. As you can imagine, and with their movement patterns being quite extensive, it’s hard to determine the population of Fin Whales, it’s probably around 100,000. Putting this number into perspective, during the 20th century heavy hunting saw over 700,000 killed. To the remaining population, the biggest threats include climate change, habitat degradation (coastal development and aquaculture), pollution and entanglement and bycatch.