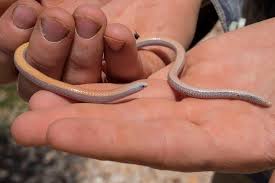 What a combination: the Bronzeback Snake-lizard. Their appearance is quite reminiscent of a snake chain necklace, but it’s essentially a legless lizard with small limb flaps, thinner than an average drinking straw and not likely to grow longer than the length of a school ruler. As a species, the Bronzeback Snake-lizard is secretive and has been hard to monitor and study, as they are seldom seen out from under the safe confines of leaf litter that provides security and protection from predators and the elements.

The Bronzeback Snake-lizard is found in dry pockets in South Australia and the Northern Territory. Population data over the years has been quite sporadic and inconsistent, leading to the suggestion that the species may follow a ‘boom-bust’ population cycle. Meaning, populations are decimated by large rain events and then recover in dry periods to follow. Habitat change remains the most significant threat to the species - due to flooding and also changes to the ground surface from impacts of grazing animals.